that someone complained about me at work last night.  Thing is, I knew they would from the moment they sat down.  They sat at a dirty table (with dishes) even though there were at least a dozen clean ones in the room.  I was crazy busy but forced myself to be as  nice as possible but they just had a hard-on and were going to find "something" to complain about so they did.  But even though I know I was ok, it hurts me and it makes me question everything.  Yeah, I will fall on my sword, I did forget to get another beer for the woman (again, crazy busy--13 tables) but still, really? You go to the front desk to ask for the manager to complain about that and my attitude? (I could have been nicer, they said)

I go out to eat or drink often with friends and it blows my mind how annoyed they get if things aren't perfect.  If the server doesn't understand the order and asks, if the food takes too long, if the server doesn't pop up in the middle of the table like a babe in a birthday cake every time they need extra ketchup.  I try to be as fast and furious as possible but, come on! Don't you have a second to see I have 10 tables and a full tray as I go by? I dunno.  It's just people have bad days and screw up but it's different for a server.

I, ahem, published a short essay on Open Salon. I'm eager to see if anyone reads it and what they have to say.

Palin thought africa was a country! 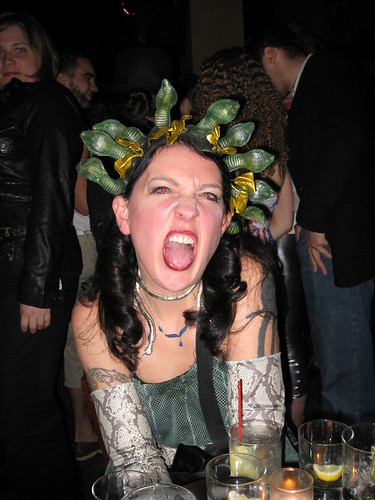 Janked from Walkingbytch who janked it from someone else...but it deserves all the janking it can get!

Instead of (in addition to?) us all sending around more emails about how horrible Palin is, let’s all make a donation to Planned Parenthood in Sarah Palin’s name.

And here’s the good part: when you make a donation to PP in her name, they’ll send her a card telling her that the donation has been made in her honor. Here’s the link to the Planned Parenthood website:

You’ll need to fill in the address to let PP know where to send the “in Sarah Palin’s honor” card. I suggest you use the address for the McCain campaign headquarters, which is:

but it makes me so mad. I've lost my rolling stones skirt. It *must* be somewhere in the apt, but I absolutely cannot find it. It is my favorite skirt and I made it and it makes my ass look fabulous.

Where oh where can you be, rolling stones skirt?

I went to the beach yesterday and royally fucked up my foot. Walking on uneven surfaces like sand was excruciating and I think I'm a bit of a trooper when it comes to physical pain. (Emotional pain is another story, I'm a big baby when it comes to that!) Anyway, intestinal blockage surgery and the foot operation itself makes me a bit of an expert on pain. It fucked up my plans for the rest of the night which included going to the derby and seeing DJ Hutz at Bulgarian Bar later.

The bandages came off and my foot looks horrid! It's hard to believe that it will ever look normal now. It's swollen, bruised, the stitches left a scar and the scar left a scar. Plus I have that nasty pin in it. Here's a photo:

I want to get a pedicure, but prolly the best thing for me to do is lay around with my foot up in the air for the day.

Apparently the surgery went well. Of course, I got my period during the surgery and since I bleed like a murder victim my first couple days, I bled all over the gurney I was placed on. thankfully the nurses were understanding and gave me what I needed.

Then when I got home they were shooting a movie on my street and had the street I live on blocked off. Jlo, who picked me up from the hospital, explained to the pa that I couldn't possibly crutch my way down the block as I just got out of the hospital and the pa *allowed* the car down the street. Crutches are hard. I practiced last night for a while but it's a different story when you know you can put your foot down. I'll get the hang of it. I broke my ankle twenty years ago now and got along just fine in the winter in buffalo (snow and all). It just takes some getting used to.

I have no pain as the doc shot my foot up with a local that he said will last 10 to 12 hours. Which is good as I accidently landed on my foot managing my way around the apt. also, I can't reach my peanut butter. It is buried under all the groceries I bought over the last week. I just simply can't find/reach it. I'll get my neighbor on it later.
Collapse